LEBANON – Nathaly Farraj.  In real world terms, she could be regarded as a babe, but in pageant terms she is not in serious contention for the semifinals.  Her best prospects is a credible showing.

MACAU – Cherry Ng.  This Miss World 2010 veteran is actually polished enough, though it’s still an uphill battle for her to be in serious contention for the finals.

MADAGASCAR – Miando Ratsimiahotrariva.  The first thing that popped in my mind when I first saw her in the press presentation was she would’ve been a shoo-in to be shortlisted in Miss World Beach Beauty.  She has those exotic features and the natural fit (though not buffed) figure that Miss World tends to appreciate.  For this pageant, though, her looks are not the sort that make Filipinos turn their heads, so it would’ve been an uphill battle for her to make that much needed impression.  In fact she could be deemed as raw and unpolished.  Still, it’s nice she got significant face time in Miss Italy’s YouTube videos, as she’s one of the roommates.  A great tidbit learned from one of Miss Italy’s videos:  “Malagasy” is actually pronounced like “Malagash”.

MALAYSIA – Tze Hui Tay. You have to hand it to her that she makes the most of what she has.  Still, it will be an uphill battle for her to make an impression with this crowd and be in serious contention for the semifinals.

MARTINIQUE – Coralie Leplus.  What I noticed first and foremost about her is her asymmetrical haircut.  The left side of her head is very short to the point that it’s almost shaved, and the right side is shoulder-length.  To be blunt, we have been spoiled with stunners like Murielle Celimene (2004) and Pascale Nelide (2009) that she could be considered a let-down.  Still, she’s a worthwhile contender in my book. 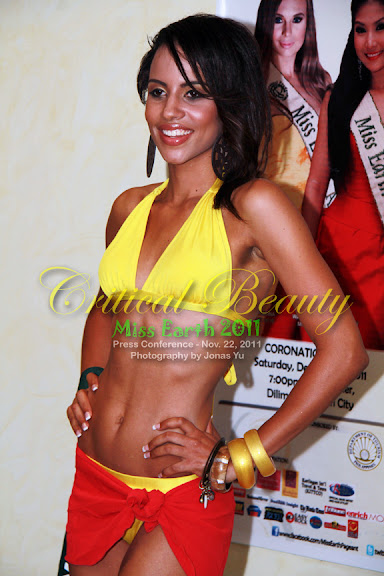 MEXICO – Cassandra Becerra.  She is the first person to arrive for the competition, and attention remains fixated on her since then.  She has the glamorous and charismatic Latin good looks that make me recall Miss International 2009 winner (and Miss World 2008 semifinalist) Anagabriela Espinosa, and I have this feeling she is on track to win it all.  Though judging from the photos I would’ve preferred India to win Best in Evening Gown, she is a worthy winner of that special award.  I think the only hindrances to her garnering an element in this year’s pageant is if they decided to style her hair like Little Lulu, which was Anagaby’s downfall back at Miss World 2008, and perhaps if she would have a “major major” epic fail in the Q&A round (which is doubtful as I feel she’s a solid communicator and a focused-enough competitor for that).

NEPAL – Anupama Aura Gurung. During the press presentation, this lady engaged the audience with her lively speech expressing her love for our country.  Though it will be an uphill battle for her to be in contention for a semifinals slot, she makes a positive impression.  There are angles where she resembles Philippine theater actress Pinky Amador.

NETHERLANDS – Jill Duijves.  She initially appeared seeming to have spent a bit too long in the tanning bed, but as the days wore on, the tan faded and several pageant fans and pundits are noticing her as a sleeper possibility for the semifinals.

NEW ZEALAND – Alexandra Scott.  What I noticed most about her is that she looks rather mature for her biological age.

NIGERIA – Munachi Uzoma.  She’s one of the latecomers.  To be blunt, her very native features are not the sort that would make her in serious contention for the finals.

NORTHERN IRELAND – Alixandra Halliday.  She has angular features, but in general this lady is attractive enough to make a positive impression.

NORWAY – Marion Homlong.  This Nordic brunette qualifies as attractive, though she’s a longshot to be in contention for the finals, unlike, say, Miss Sweden.  Generally a solid contestant, though, who deserves credit.

PAKISTAN – Sanober Hussain.  This country is known to be staunchly Muslim, and they usually make a big fuss when they see a representative competing in a beauty pageant, much less walking in a bikini.  Yet, this lady has no qualms appearing in a two-piece swimsuit during the press presentation.  So what gives?  The key is when you listen to her speak–she speaks with a distinctive London accent, so she’s actually an expatriate based outside of the country she’s representing (well, all ladies representing this country at this pageant over the past years are expatriates, anyway).  Pageant fans and pundits assumed that because of her YouTube videos, Italy was a cinch to win the Friendship title, but apparently this lady has a broader circle of friends than Italy hence she clinched this instead.  In general, she’s a worthwhile contender.

COMING UP:  PANAMA to SPAIN