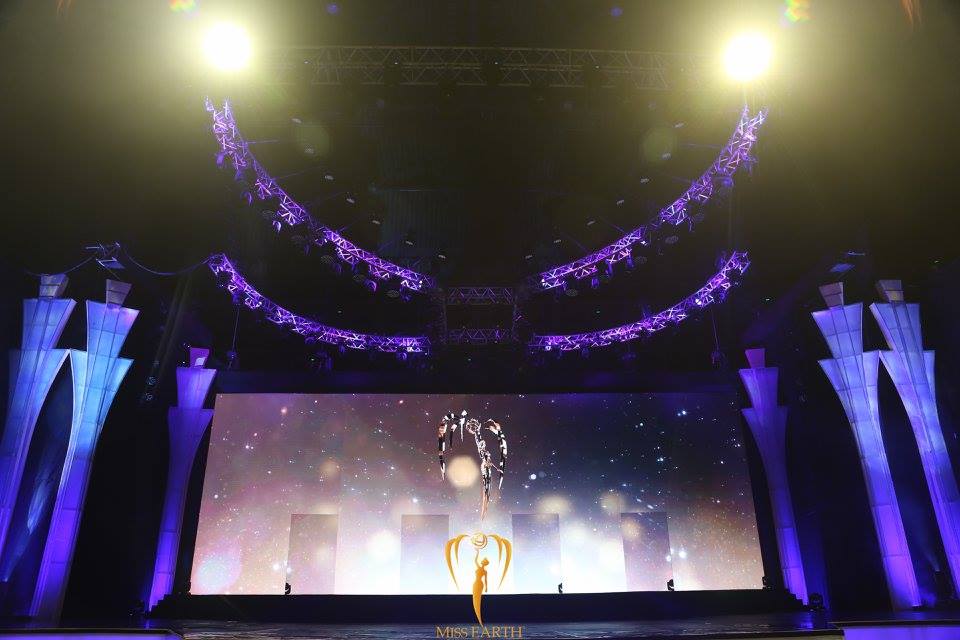 This year Miss Earth had made some changes that looked very promising and potentially help recover its cachet with the international pageant fandom.  First was the “new transparency” as the former closed-door prejudging round are now staged as three separate grand events covering the three primary criteria for selecting the 16 semifinalists.  Then there is the promoted opening number, where the 86 Miss Earth delegates were dressed in superhero costumes of their choosing, obviously inspired by the resounding success of the Wonder Woman film.  But did these changes and gimmicks deliver the intended results?

The opening number began with a bang feautring those spotlights on three male dancers with the motifs of air, water, and fire behind them and the reigning winner, Ecuador’s Katherine Espin, sashaying to a remix of Dua Lipa‘s “New Rules“.  This then segued to the contestants’ live introduction in their superhero costumes, set to a remix of “Instruction” by Jax Jones featuring Demi Lovato & Stefflon Don.  The introduction was conceptualized with the 85 contestants introducing themselves in their superhero personas, not their real life identities (though a few like Belarus’ Poli Cannabis, introduced with their real names).  Now, I actually love the concept and I love the live energy of the introductions, though the candidates were probably rehearsing their spiels ad nauseam that in the live final their voices generally sounded worn out, rendering their announcement of their superhero personas almost incoherent.  The captions on the telecast were no help as it showed only their real names, not their supposed superhero personas–I wish the production also added those superhero names in the captions, too. 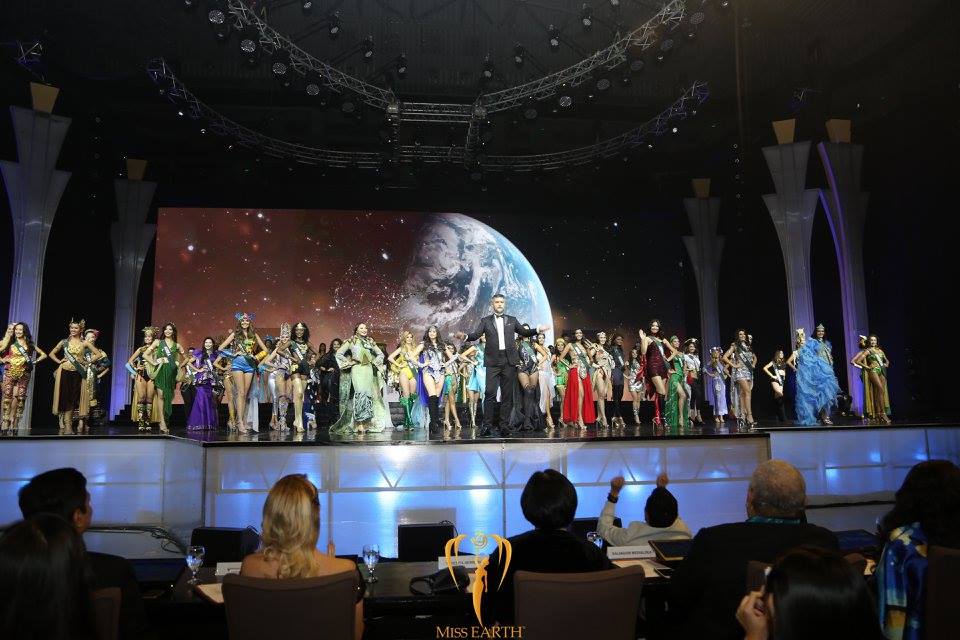 For most viewers, the best thing about this year’s pageant was the host, James Deakin*1, a famous transportation blogger and TV/radio personality.  I agree with that assessment, as James proved to be a smooth, confident, and energetic host who was very clear in setting the rules and guidelines on how the programme would proceed, and bonus points for being very easy on the eyes.  Arguably, we haven’t seen this high caliber of hosting since Bob Barker‘s 20-year Miss Universe stint.  But I do have a quibble with the style he announces the countries’ names–early in the proceedings his announcements came with a growl that made the feminist in me uncomfortable–it’s a tone that you tend to associate with either a monster truck show or a seedy bar contest.  But I’ll give James the benefit of the doubt here, as I know his intention was simply to channel the audience’s enthusiasm and energy with that announcing style.  Also, on a positive note, it also reinforced and reminded me of his passing resemblance to 300 actor Gerard Butler, and that now-immortal line “THIS…IS…SPARTAAAAA!!!!!”  I’m glad later in the evening the growl disappeared and it made him a better host that way.

*1 I only learned of him recently because of his posts on the state of Philippine transportation being shared by my Facebook friends.  I was initially under the impression he’s an American expatriate, but I found out after reading his biography that he’s actually Filipino-British born in Australia but moved to this country in his teenage years. 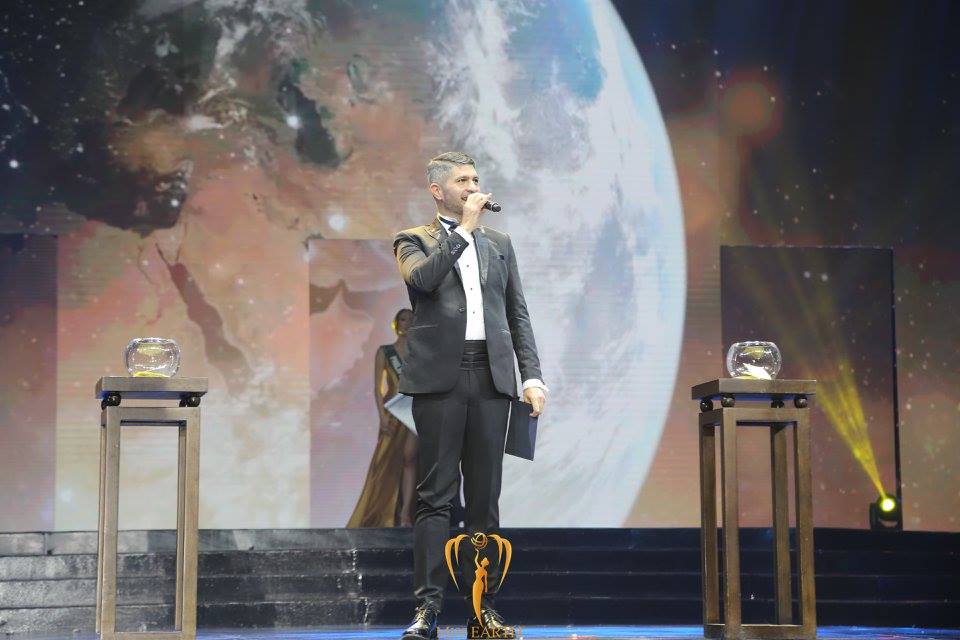 There are two international artists who provided the live musical entertainment:  Barbadian singer Shontelle and Indonesian violinist Iskandar Widjaja.  After the Top 16 semifinalists were announced and paraded in evening gowns, Shontelle performed her biggest hit, 2010’s “Impossible“.  Yes, she sang live, albeit with a vocal backing track.  She’s good, but well, about 90% of the vocal power she delivered in the recording.  Iskandar performed after the Top Eight hashtag round, providing background music for the Top Eight’s final look.

One major change in this year’s pageant compared to previous years is that they decided to announce the Top 16 for each criteria in the prejudging rounds, and those Top 16 would step forward briefly onstage to be acknowledged for their performances in each category.  There are pros and cons regarding featuring this step–I personally welcome it as we as an audience would have an inkling on who impressed the judges in teh preliminary rounds.  And I have to say, there were some surprises in those shortlists.

Because at least the ladies who did not make the overall Top 16 got their moment in the spotlight when they figured in the shortlists, let’s pay a little tribute to those non-finalists.

The non-finalists who figured in the Top 16 in Figure & Form were Brazil (Yasmin Engelke), Canada (Jacqueline Marsh), Panama (Erika Parker), Poland (Dominika Szymańska), Puerto Rico (Karla Aponte), and Wales (Sophia Bettridge).  I was a bit surprised by Canada’s inclusion, and it goes to show that there are divergent opinions regarding this ladies who medalled in their groups’ respective swimsuit competition like Ecuador (Lessie Giler) and Peru (Karen Rojas) didn’t make this cut.  Of course, sentimentally I wished Panama and Puerto Rico also figured in the other categories but the judges in those two categoreis would beg to differ. 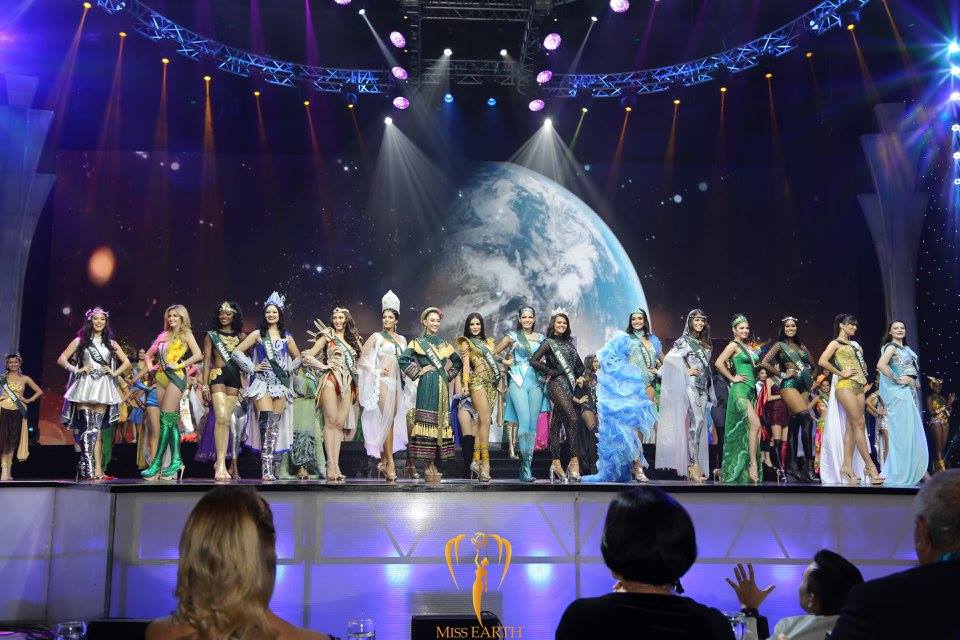 At least Ecuador had the consolation of making the cut in the no-makeup Face & Poise round alongside  Bolivia (Giancarla Fernandez), Costa Rica (Fernanda Rodriguez), Honduras (Valeria Cardona), Israel (Elian Qupty), Serbia (Marija Nikić), and Ukraine (Diana Mironenko).  I agree that all the ladies in this list have comely faces but I wish there were room for the likes of Korea (Hannah Lee), England (Charlotte Brooke), Moldova (Veronika Bozovoi), Rwanda (Uwase Hirma Honorine) and the above-mentioned Panama and Puerto Rico.  I’m glad at least Israel got shortlisted here, as it served as consolation for her disastrous interview performance.

Speaking of Interview (officially, Intelligence & Environmental Awareness), making the shortlist without advancing to the overall Top 16 were Belize (Iris Salguero), Costa Rica, Denmark (Sabrina Jovanovic), England, India (Shaan Sunas Kumar), and Indonesia (Michelle Alriani).  Most of the Group 2 ladies who spoke English were not recorded for the interview round, but it turns out the majority of the top interview performers come from this group, like Belize and England.  The other ladies noted here were truly worthy to be shortlisted based on what we have seen.  However, I was also impressed with Puerto Rico, U.S. Virgin Islands (Kaylee Carlberg), China (Mei Zhan), and Mongolia (Tugs-Amgalan Batjargal).

You can partly figure out who would ultimately make the overall Top 16 by basing it on who figured in at least two of the three prejudging categories.  However, one lady somehow failed to advance despite making the shortlist in two categories and she is:

COSTA RICA – Fernanda Rodriguez.  She made the shortlist in Face & Poise and Intelligence & Environmental Awareness.  It seems she was severely marked down for her figure–this pageant isn’t willing to give a Siera Bearchell card, it seems.  Most likely she was bubbling under the overall Top 14==as you’ll discover there is a continental allocation in play in selecting the overall Top 16, and one continent didn’t have any lady who made any these shortlists….