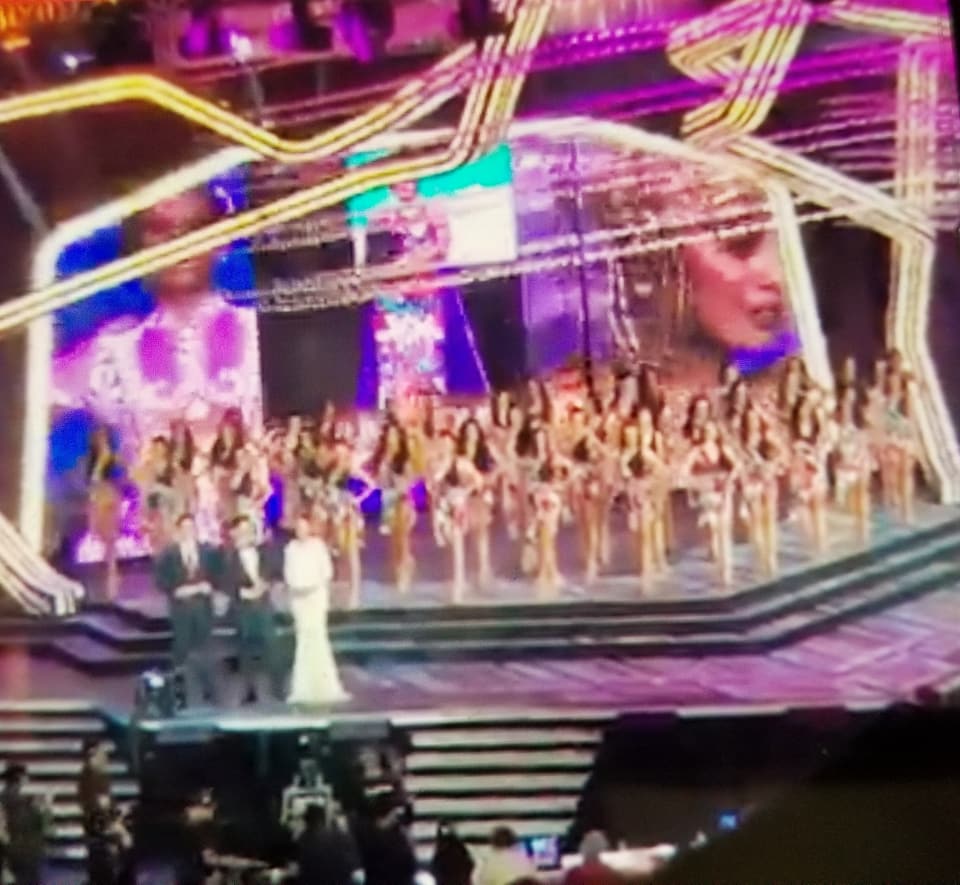 There was a theme set up for this year’s edition of Binibining Pilipinas:  Beauty as Art.  So this was conceptualized with a pre-taped segment filmed at the University of the Philippines (UP) campus in Diliman, Quezon City, where the reigning queens pose for drawings and paintings made in their likeness and uttered spiels extolling how the beauty of a Filipina is a work of art.  After this serene segment, the action segued to Araneta Coliseum as the usual modern upbeat EDM music blared to usher in the 40 candidates.  I’ve been trying to Google the song and artist for that number, but found no luck.  It seems to be called “Electric”.  Whatever the case, it’s peppy and upbeat.  The opening number outfits seems a bit skimpier than in previous editions, as they are generally black-and-white sarongs draped over what seems to be black one-piece swimsuits, or a low-cut V-necked shirt-and-shorts ensemble.

The presenters for the night were Richard Gutierrez and Miss Universe 2015 Pia Wurtzbach, with color commentary by Miss Grand International 2016 1st runner-up Nicole Cordoves.  I have no complaint about Richard and Pia’s hosting, though I noticed there are pageant netizens who were harshly critical of the latter, along with questioning some of her wardrobe choices (like the supposedly unflattering white gown she wore in the opening segments).  Sure Pia might have occasional diction issues but I think she did a good job overall.  Now, Nicole could be viewed the unsung hero of the night as she assumed the role of the announcer when the candidates paraded individually in swimsuit and evening gown, and she has an unsung role holding the bowl which the judges would use to select the semifinalist they would ask the question to.

Just like last year, not all 40 candidates get to parade in swimsuit and evening gown.  After the first set of special awards, the 40 were whittled down to 25, and the contest proceeded like in years past.  Before the swimsuit segment proper, there was also a tribute to the late designer Pitoy Moreno, who recently passed away late January of this year.  I highly appreciate the salute as he was a major pioneer in our country’s fashion industry–I just only wished they also highlighted the fact that he designed EGOT legend Rita Moreno‘s Oscar gown, which gained headlines recently as she re-wore it in this year’s Oscars.

Moophs was on-hand during the evening gown segment as he took role as DJ playing a medley of four songs while he overlays a live guitar over those tracks.  Meanwhile the LED screen pays tribute to one of the directors of the Binibining Pilipinas Charities, Inc., artist Betsy Westendorp-Brias, as her paintings flash on the screen.  The songs include:  “Glory Days” by Sweater Beats featuring Hayley Kiyoko, “One More Weekend” by Audien X Max, and “Dreamer” by Axwell & Ingrosso.

I’ll discuss more about the Top 15 question-and-answer round in the next section.  After that famous round came the traditional farewell walk and pre-taped speeches of the outgoing queens.  The most memorable is the one delivered by Bb. Pilipinas – Supranational Chanel Olive Thomas, as it’s the most refreshingly light-hearted and she made the effort to deliver it in Tagalog, albeit with an obvious “twang”.  If you’re after substance and gravitas, the speeches delivered by Bb. Pilipinas – Intercontinental Katarina Rodrigueza and Bb. Pilipinas – Grand International Elizabeth Clenci had the most impact.

The ladies who made the Top 25 are indeed worthy and competitive.  In fact, in some ways it’s like splitting hairs coming up with a ranking for the Top 25, but here’s my best attempt.

BINIBINING 13 – Kristie Rose Cequeña.  I like that she shortened her hair further for finals night–it made her stand out a bit.  Still, minor quibbles with her figure, her unconventional beauty, and her serviceable silver satin gown sealed her fate and again she didn’t advance further.

BINIBINING 4 – Ana Patricia Asturias.  I pegged her in my Top 15 list, but something about the way she looked on finals night just didn’t flatter her well, and the judges just decided to not let her advance further.

BINIBINING 39 – Trixia Marie Marana.  She’s generally solid, but solid is not enough to get you to the next level.

BINIBINING 9 – Agatha Lei Romero.  There is a regal potential in her green evening gown, but again, the issue is with a host of stronger contenders, her gown didn’t make as much of an impact. 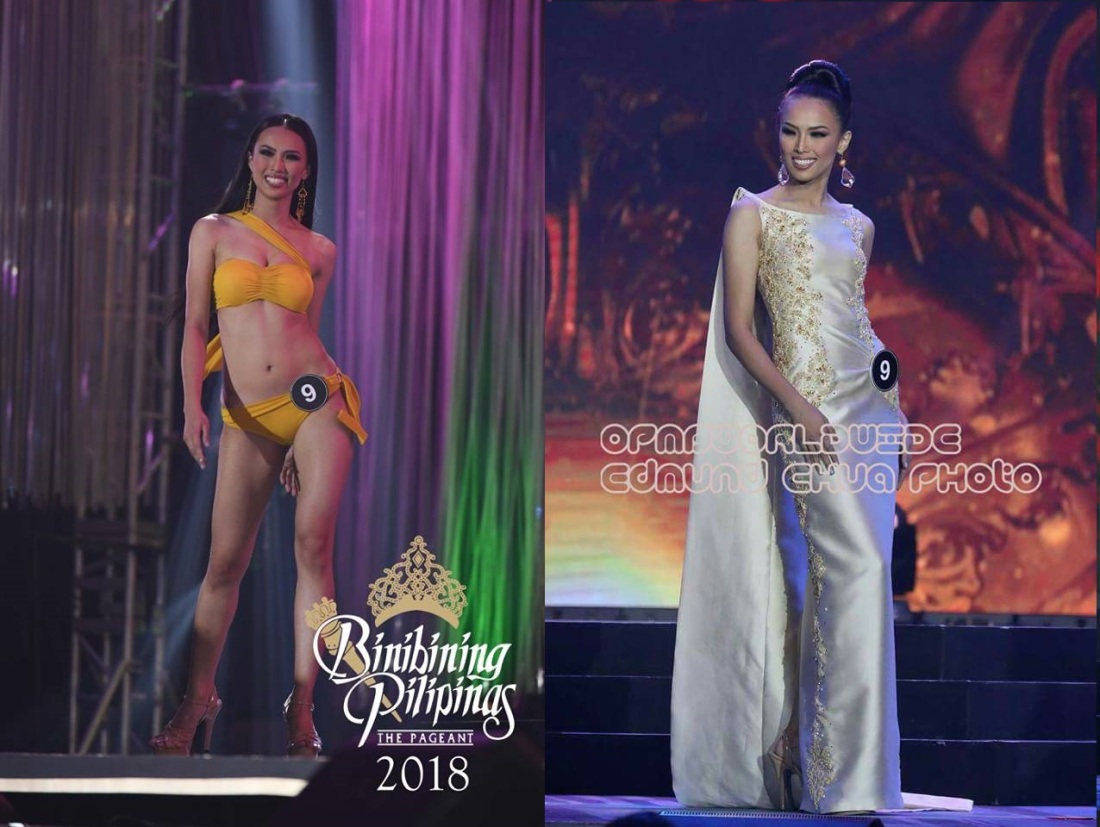 BINIBINING 34 – Mary Joy de Castro.  Her figure is a bit on the thick side, and though her silver gown with dark green skirt is a good gown, it’s not enough for her to advance to the next round.

BINIBINING 7 – Sigrid Grace Flores.  She did a creditable enough job with her hair straight and parted in the middle and parading a nude-colored gown with sheer blue shawl.

BINIBINING 10 – Kayesha Chua.  She delivered a sleek presence all throughout, especially in her nude-colored long-sleeved evening gown. 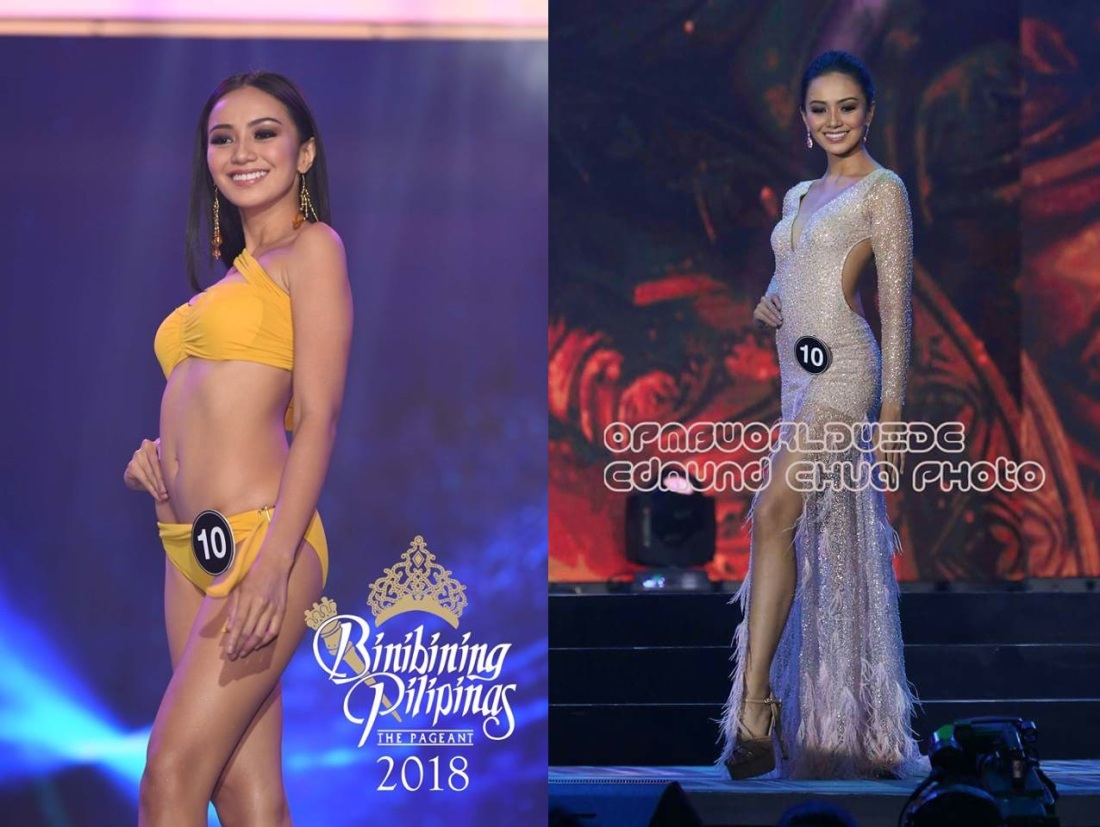 BINIBINING 37 – Patrizia Mariah Garcia.  Her sequined applique gown with green feathered bottom made a standout impact that is why I place her close to bubbling under the Top 15 in this list.

BINIBINING 23 – Ena Louis Velasco.  It is very surprising that this lady was left out of the Top 15, despite hype that she’s a front-runner for the winners’ circle.  I noticed a warning sign at the national costume competition as her costume was very blah and she lacked impact in it.  Though no one can really find fault in her performance, she doesn’t quite generate a spark onstage and that might be the reason the final night judges decide not to let her advance. 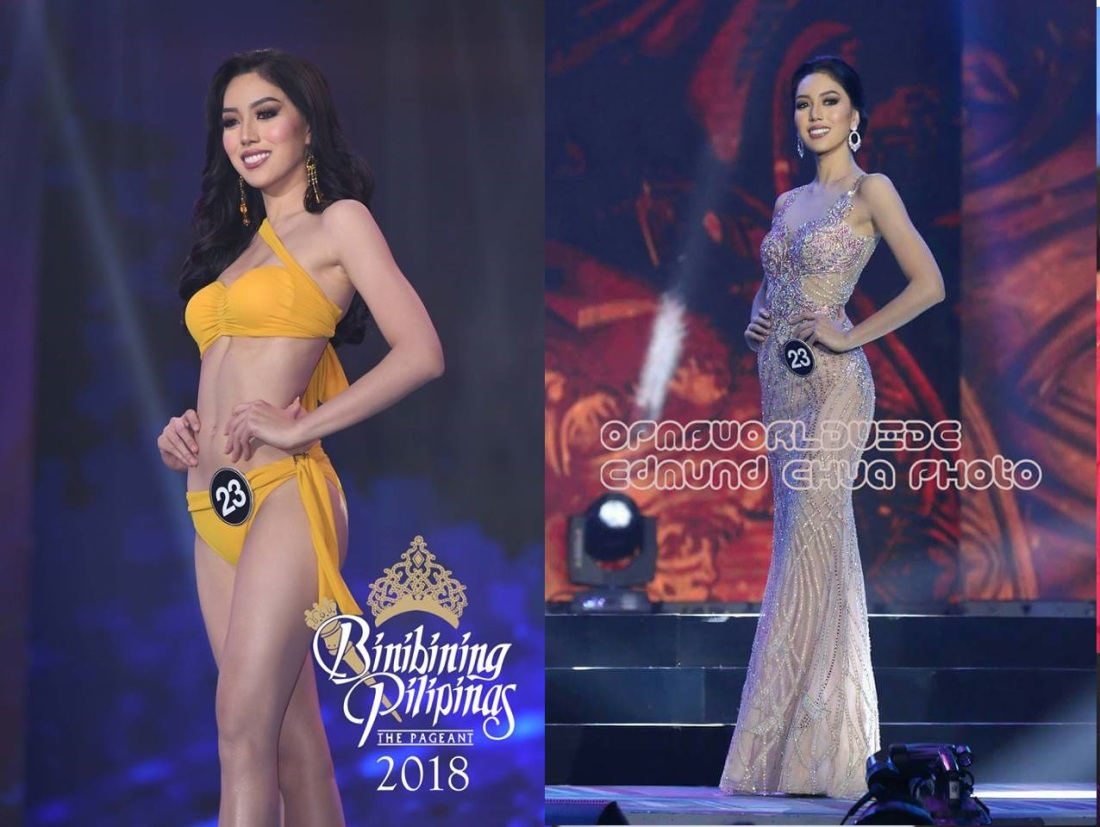 BINIBINING 8 – Sherry Ann Tormes.  We have to give her credit that she looked great this particular night, as she was made up and styled right.  She also earned two special awards, Miss Talent (for her stirring cover of one of Aretha Franklin‘s classic hits, “(You Make Me Feel Like A) Natural Woman” and the Miss Friendship award.  But with prettier lookers out there making larger impact, there isn’t enough room for her, but garnering two awards is a big consolation as well, one lady swept up most of the special awards… 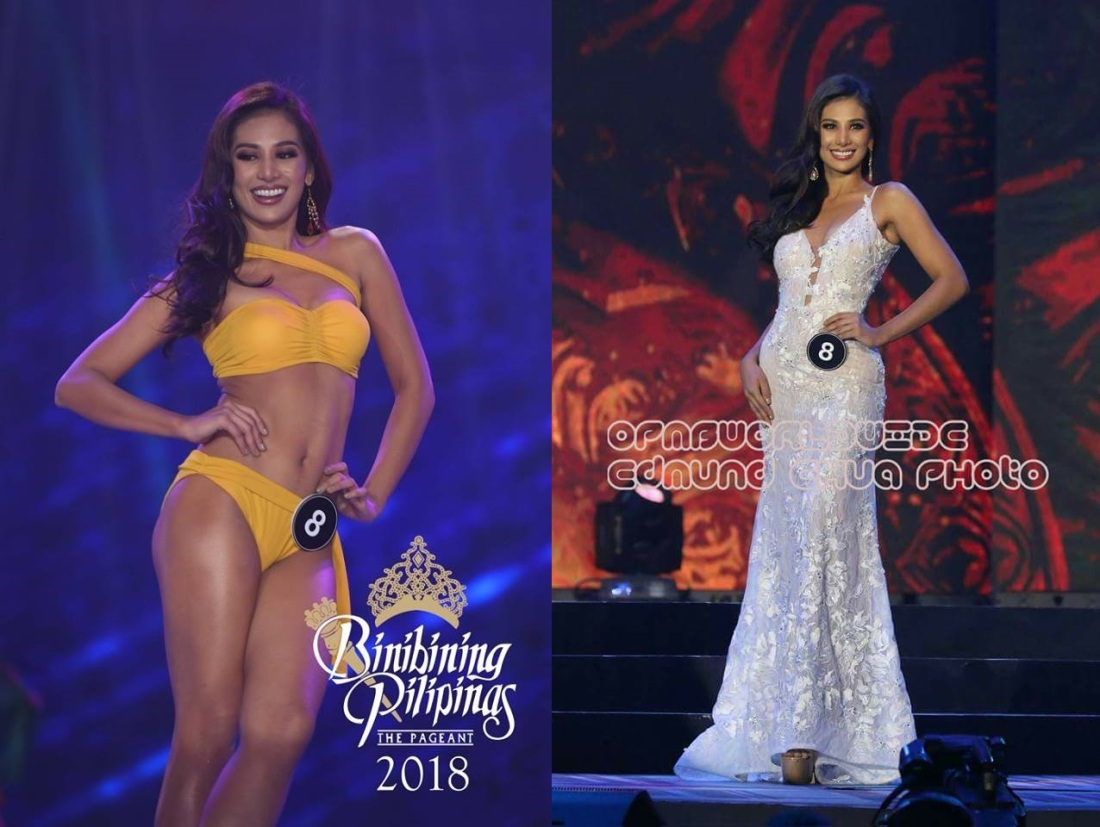