As expected after calling out the Top 25, there is another couple of rounds of wardrobe changes.  First, the Top 25 paraded in black-colored casual and cocktail wear designed by Lidia Kalita, set to a medley of “Don’t Be So Hard on Yourself” by Jess Glynne and “Forgive Me Friend” by Smith & Thell and Swedish Jam Factory.  The segue between a house-inflected number and a Mumford & Sons-meets-Avicii may sound a bit of a rough segued but individually, they are enjoyable to lsiten

Another fashion parade followed, featuring gowns designed by Ela Piorun set to “Wish You Well” by Sigala & Becky HIll and Sia‘s mega-smash “Cheap Thrills” (the remix version with Sean Paul).  After this sequence they would announce the Top 10.

Before I discuss the Top 10, time to talk about the ladies who made the Top 25.

25TH PLACE:  NEW ZEALAND – Eva Louise Wilson.  Lookswise I was never that into her and she could be the headscratcher of the group.  But it turns out she secured her slot via one of the four wildcard slots based on their strong interview performance in the 2nd round of Supra-Chats.  If it weren’t for that wildcard, she may not have ranked in the Top 30.  At least we can salute and pay respect that her gift of gab and intelligence helped her overtake several others. I’m slightly upset that this led to  AUSTRALIA being shut out. 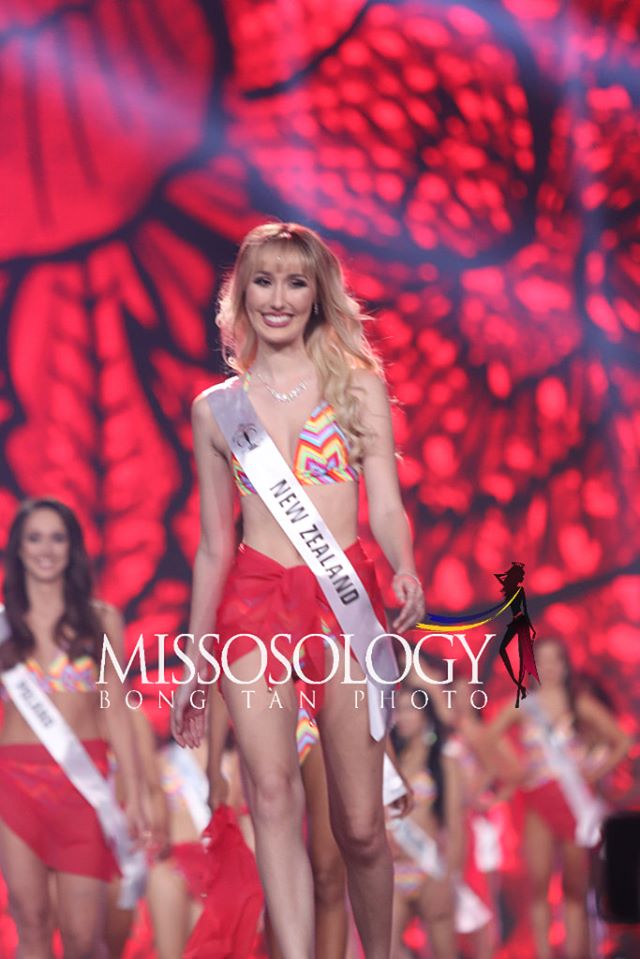 24TH PLACE:  SINGAPORE – Naomi Huth.  The bottom three of the Top 25 are the Supra-Chat champions, but many fans (including myself) felt she would’ve at least figured in the Top 30 anyway as she’s surprisingly polished.  I’m stoked that this country not renowned for figuring in pageantry has its moment in the spotlight.

23RD PLACE:  IRELAND – Jessica VanGaalen.  She’s the third who secured her slot thanks to the Supra-Chats, and I definitely have no objections to her inclusion.  It’s just too bad she is clearly outperformed in terms of stage chops that definitely she could not be in contention for the Top 10. 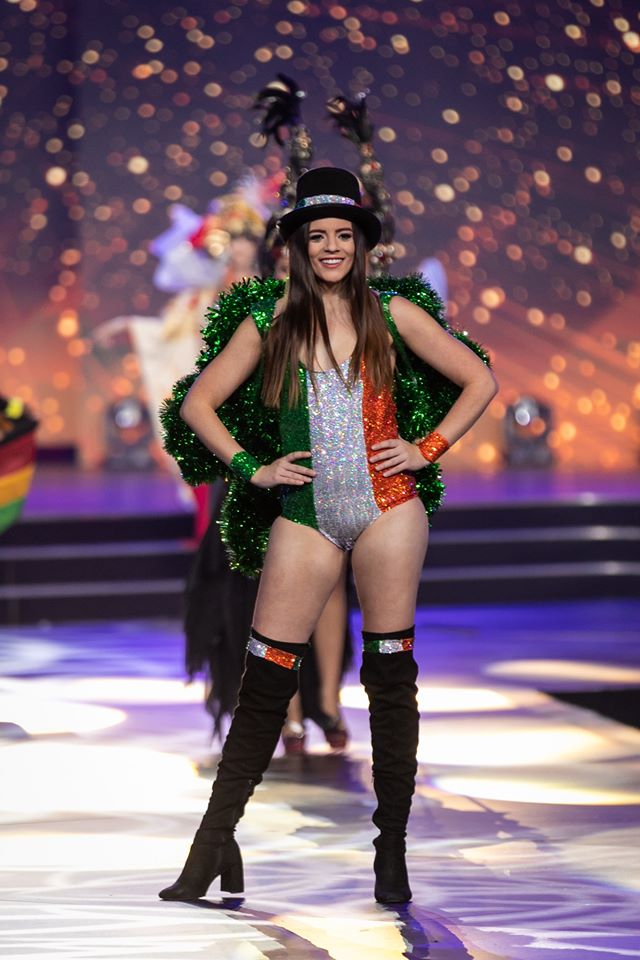 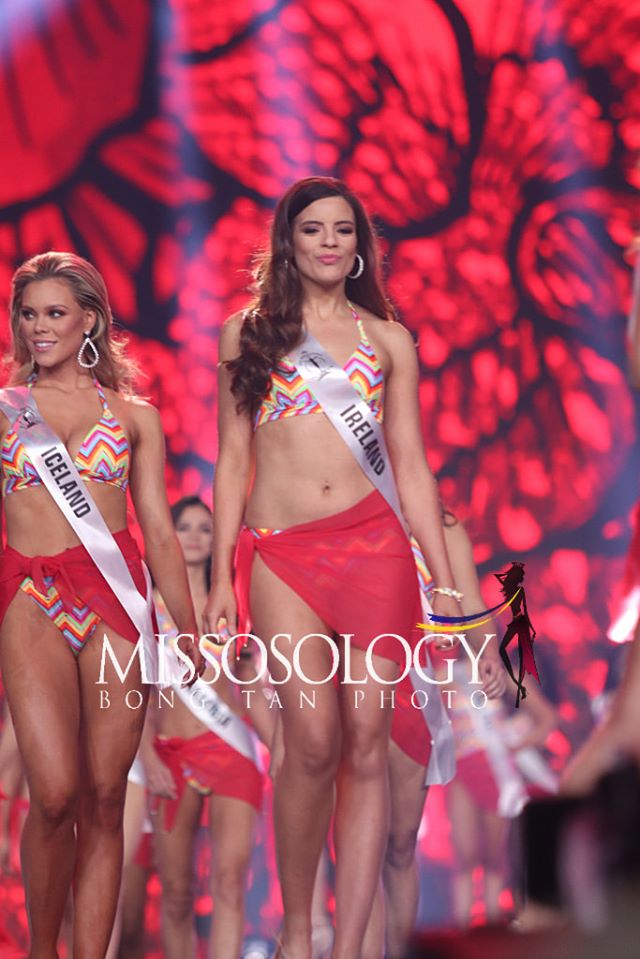 22ND PLACE:  MEXICO – Dariana Uriste.  She has a face that I classify as “sugar pretty”, something that some people might appreciate but others might find a tad too “sweet”.  Though she made a splash as the winner of Best National Costume, I know she doesn’t have what it takes to advance further to the next round. 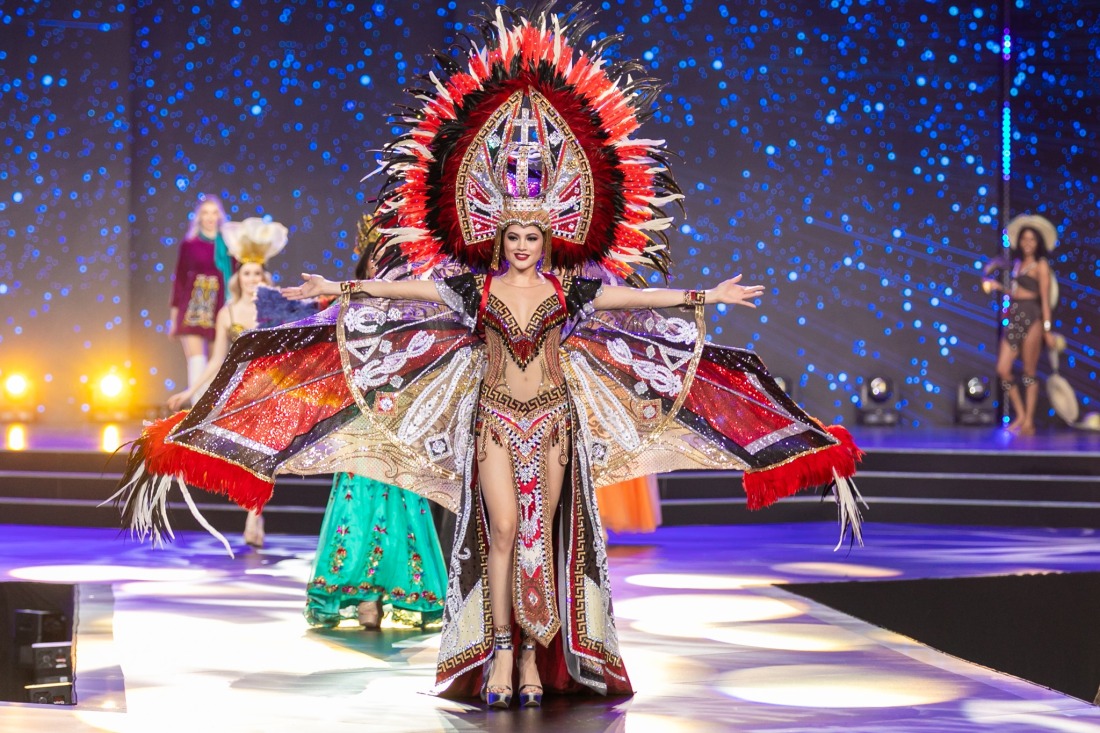 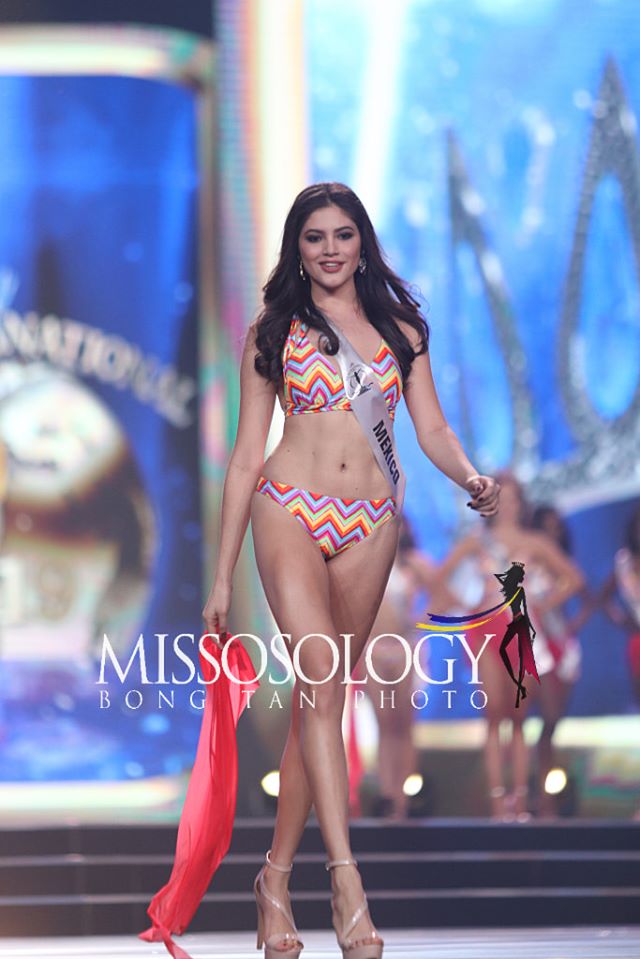 21ST PLACE:  TRINIDAD & TOBAGO – Yia-Loren Gomez.  Though I betted on JAMAICA, I’m not that surprised this lady was picked over her instead.  She was one of the Supra-Chat semifinalsits, and she also made a major splash in her colorful national costume besides her overall polished presence that I don’t mind seeing her in this group. 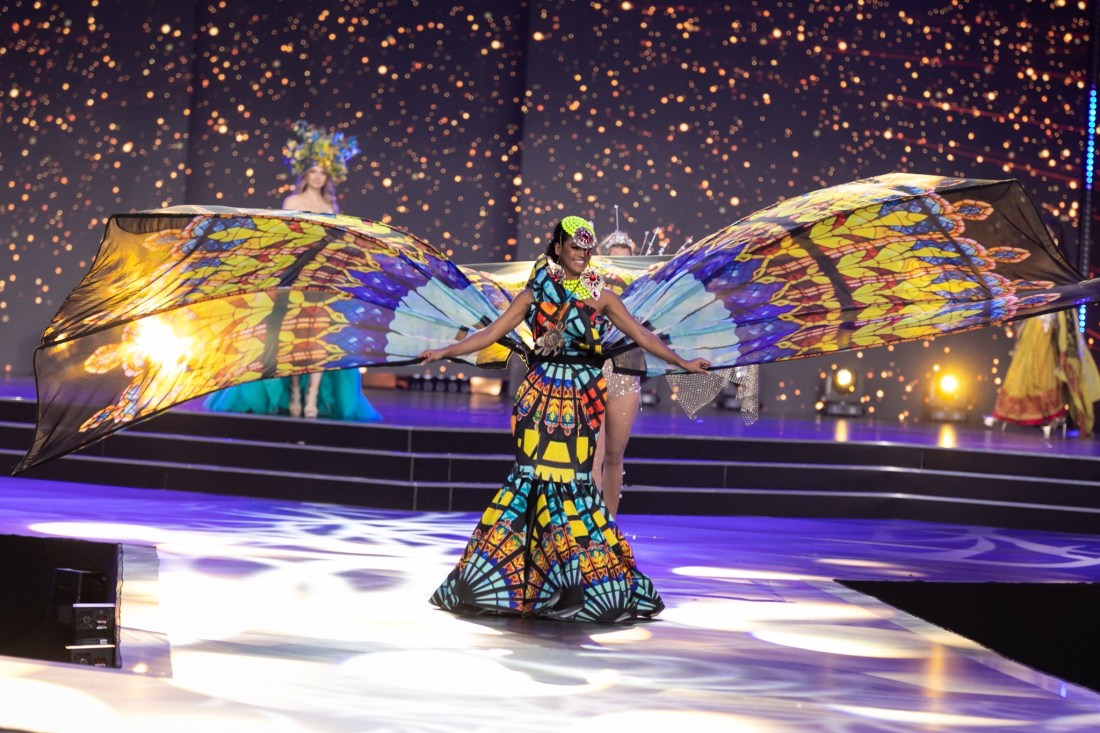 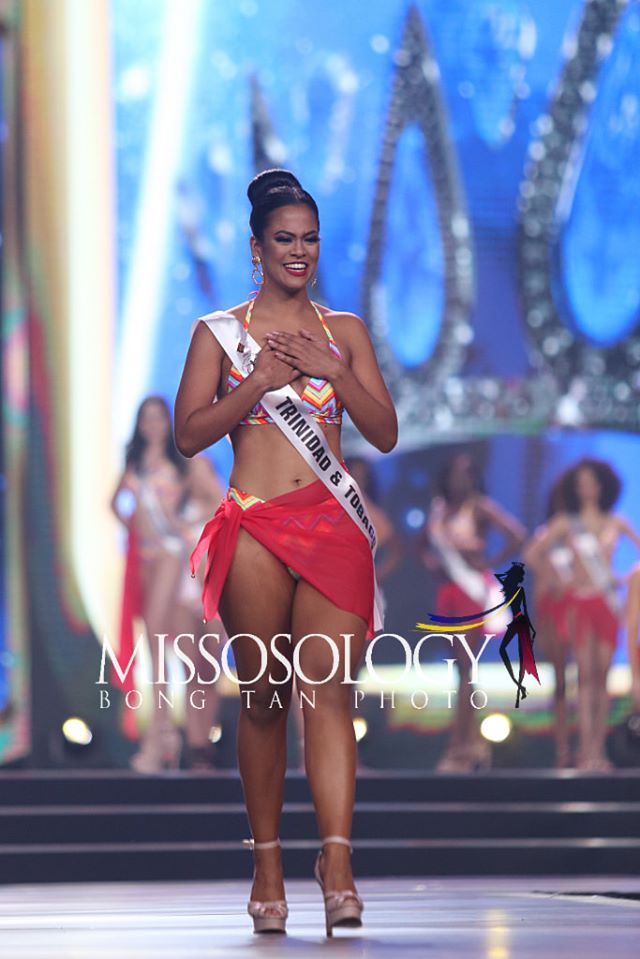 20TH PLACE:  POLAND – Kamila Świerc.  Everyone knows there is always a spot reserved for this host country in this pageant, and no one will complain at her inclusion.  But admittedly she doesn’t deliver as much impact as her predecessors, so this “lowly” placement is expected. 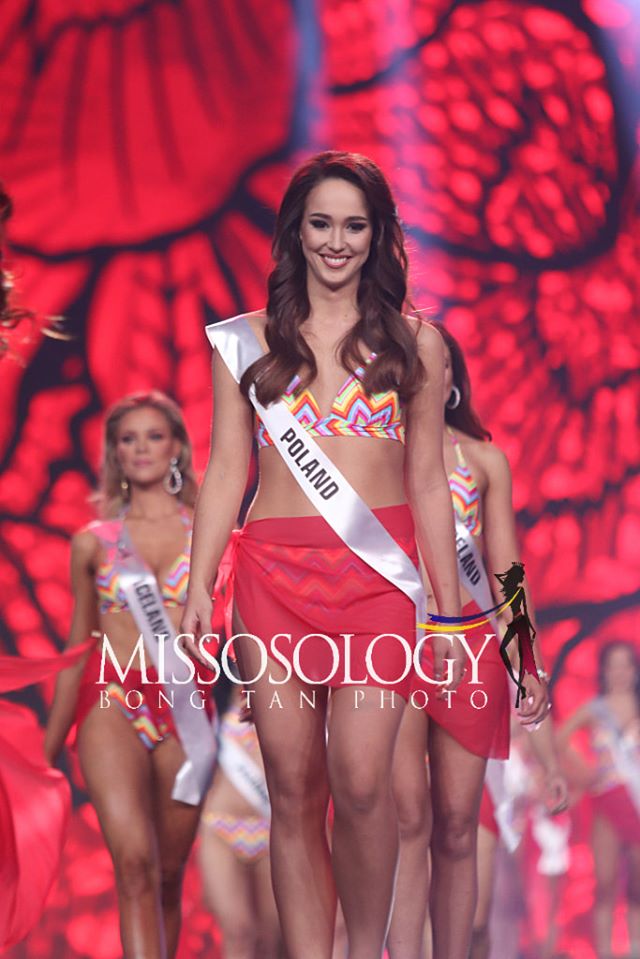 19TH PLACE:  GUATEMALA – Andrea Radford.  I only placed her in my Bubbling Under list, but she is a worthy inclusion in this group. 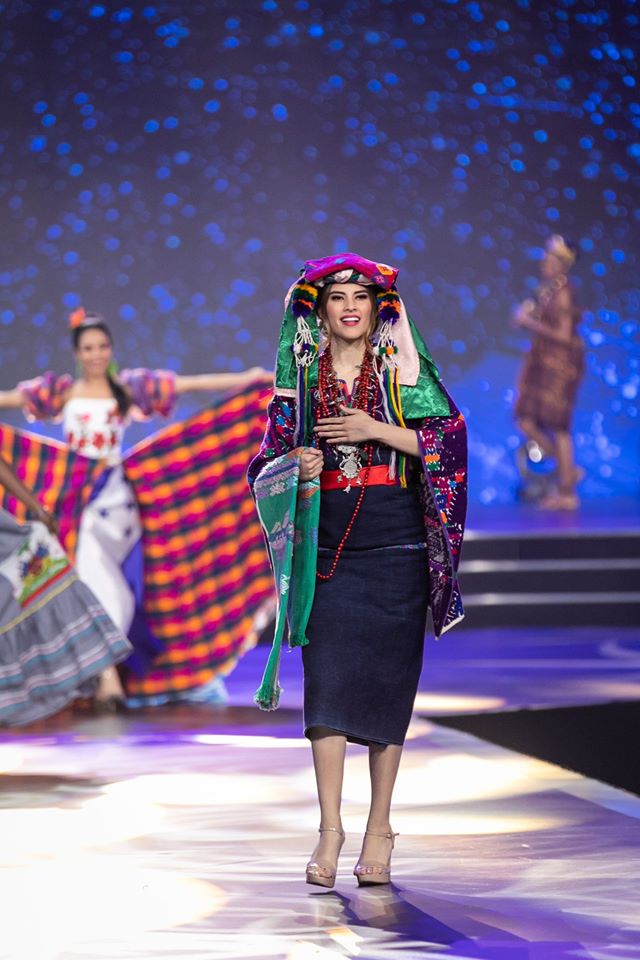 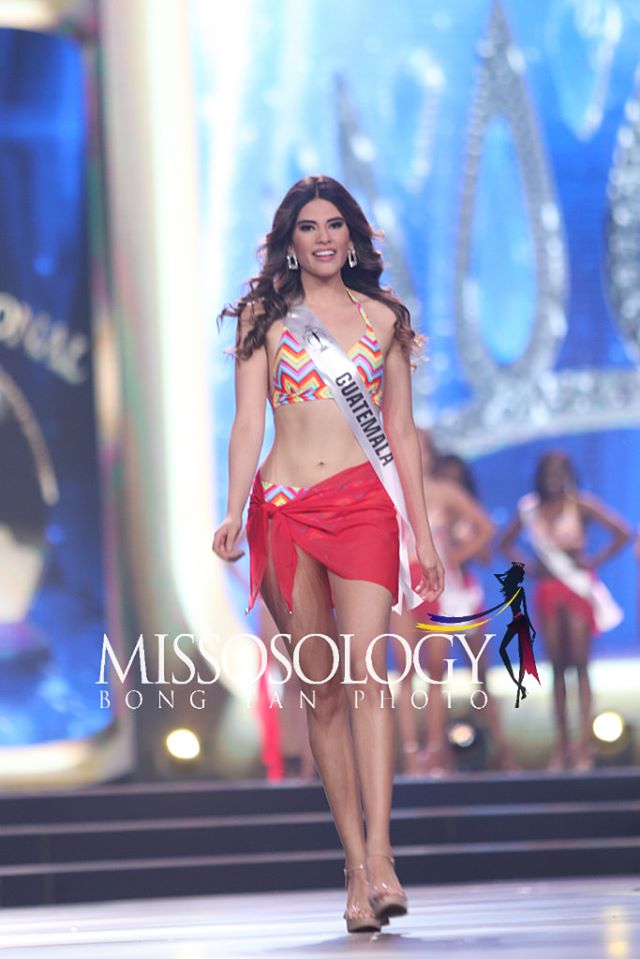 18TH PLACE:  ARGENTINA – Avril Marco.  I don’t know I only placed her in my Striking Distance list as in hindsight she’s strong enough to belong in my Bubbling Under list.  Anyway, her presence is welcome here. 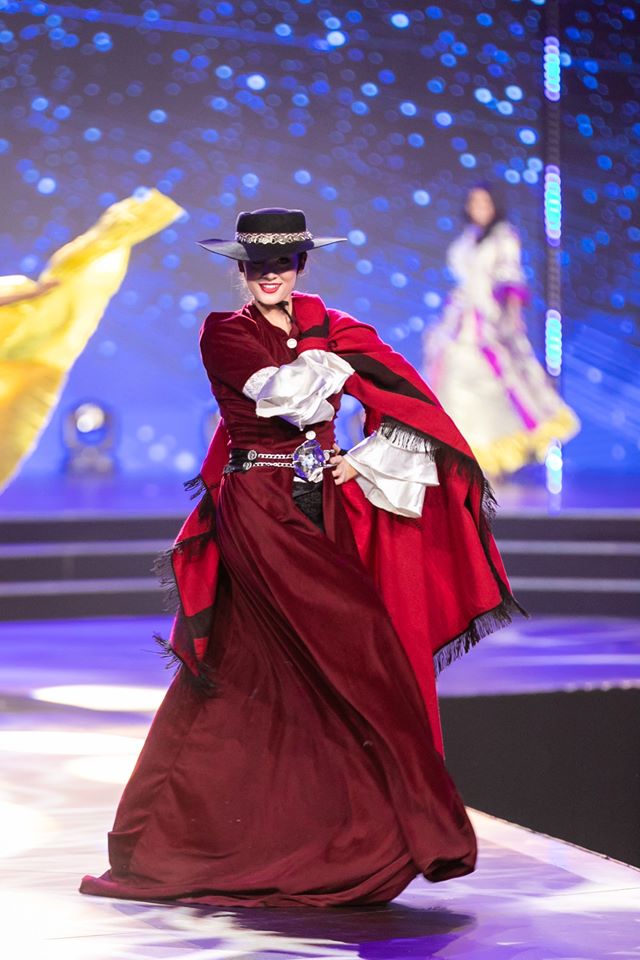 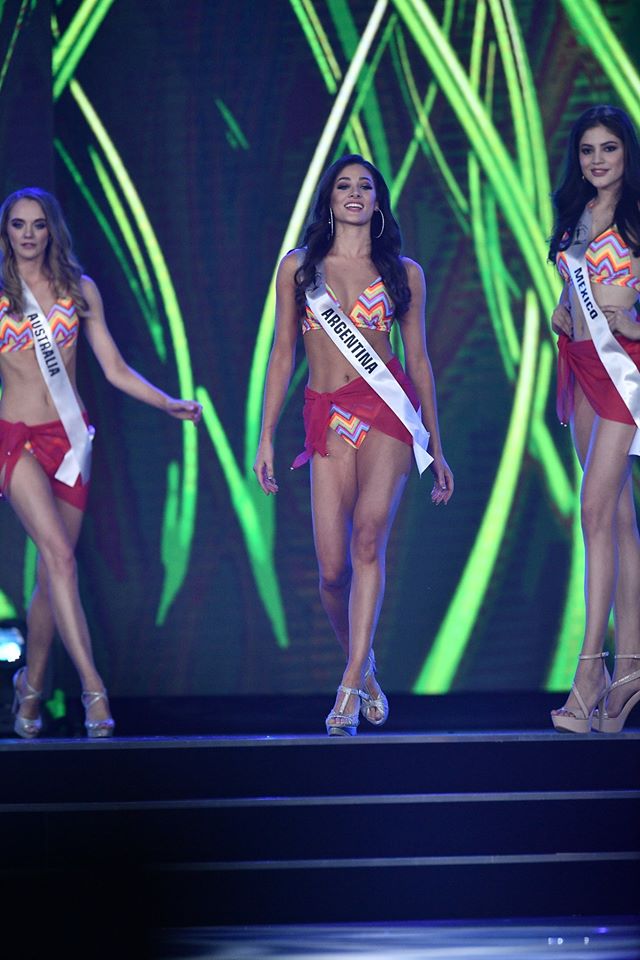 17TH PLACE:  PUERTO RICO – Shaleyka Velez.  She’s a solid follow-up to the outgoing Miss Supranational and her placement in such a competitive batch is worth celebrating.

16TH PLACE:  INDIA – Shefali Sood.  In another year, she would’ve probably made a play for the Top 10 but it’s obvious she’s drowned out by a highly competitive group like this year’s batch.

15TH PLACE:  DOMINICAN REPUBLIC – Yaliza Burgos.  She was one that I was slightly heartbroken to place only in my Bubbling Under list as I thought she is very polished, has a dusky exotic charisma, and she has superb communication skills (she speaks English with a neutral North American accent).  Glad the judges took a liking to her and granted her this spot, and this finish should not be dismissed as we do have such an extremely strong batch this year. 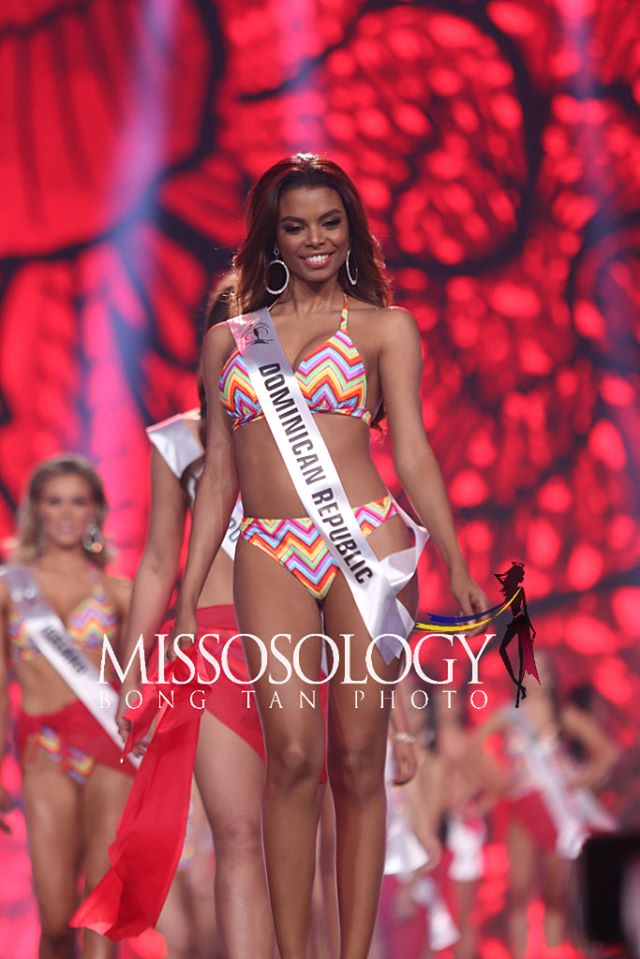 14TH PLACE:  PHILIPPINES – Resham Saeed.  I know many Filipino pageant fans and pundits would want her to advance further and equal the finish of her two predecessors, and indeed in another year she may indeed achieve that, but well, we do have such a formidable batch that the judges simply could not find room for her.  Interestingly she was the fourth Supra-Chat winner to secure her slot in the Top 25, but based on this ranking, it seems she would’ve made the cut without the Surpa-Chat win anyway.  Yes, it only equaled the rank earned by Rogelie Catacutan and Joanna Eden in 2015 and 2016 respectively, but still this rank is nothing to scoff at.

13TH PLACE:  CAMEROON – Angele Kossinda Bourmassou.  I would’ve probably ranked her lower than INDIA< DOMINICAN REPUBLIC, and PHILIPPINES, but still we have to salute she has that African exotic charisma that I won’t begrudge the judges’ high regard for her.

12TH PLACE:  NETHERLANDS – Nathalie Mogbelzada.  I was expecting her to make a play fot the Final Five because of her Miss Elegance award but apparently the judges felt as much as she’s a shoo-in, she’s not as much of a front-runner as many would’ve perceived.  She’s slightly in the same boat as… 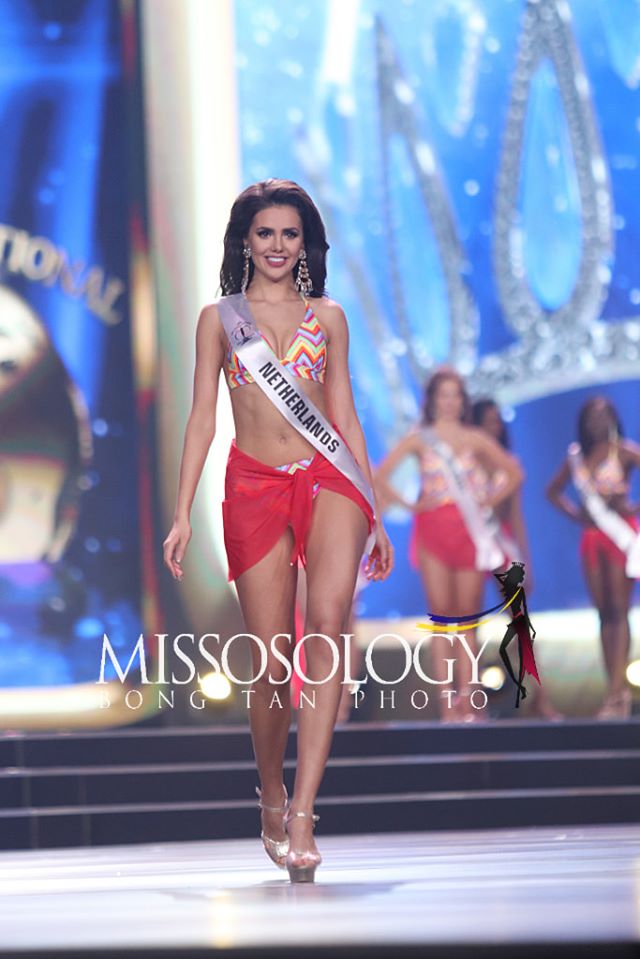 11TH PLACE:  ICELAND – Birta Egilsdóttir.  I was expecting her to advance to the Top 10, but it seems she fell a bit short to favor a couple of ladies that the judges seem to favor more.

BLOGGER’S NOTE:  Admittedly this is more than one month delayed as due to several factors mostly work responsibilities, but I hope you, the reader, would still consider this a worthwhile read, alongside my articles for Mister Supranational, Miss Universe, and Miss World…

For those who have been watching multiple editions of the Miss Supranational pageant, most would find each edition essentially unchanged, as basically it follows mostly an established template, with flashy production numbers and a near endless succession of wardrobe changes for the contestants.  There are some fans and pundits who would thinking sticking the same structure year-in and year-out results to turgid ennui as years wore on–think most editions of the Miss International pageant prior to Kylie Versoza‘s win–but well that doesn’t mean that there are some subtle developments afoot.  Up to 2015, interview skills are not really placed at a premium–just as long as you can string a sentence together, you’ll do fine.  But 2016 onwards, they added a structured final Q&A round, and this year especially with their series of SupraChats, you sense that there is now more an emphasis on a contestant’s cerebral comprehension and communications ability than ever before.  There is a risk that if we continue to head towards that direction, this pageant would lose its unique branding, but at this point there is still that “flavor” still worth reckoning.  Like the fun to be had listening to the Polish cover versions of current pop hits during the competition segments, and yes, Polish musicians (sometimes including Eurovision stars) performing onstage.

On a fiery LED backdrop, the show opened with a few seconds of the strains of the now-iconic Wonder Woman movie instrumental theme song by Hans Zimmer and Junkie XL, with sexy backup dancers anticipating the arrival of the featured musical artist, who happens to be Polish star Doda.   She sang a medley of En Vogue‘s “Free Your Mind” and Lesley Gore‘s “You Don’t Own Me“.  I have to commend Doda’s energetic take on the En Vogue classic, though there are obvious diction issues and well, altering the “straight hair” line to “blonde hair” doesn’t quite make sense.  Yes, seguing those two very stylistically disparate songs also is not smooth, but still, she was very successful tackling the Lesley Gore classic.

After the opening number we were introduced to the hosts, who are Polish YouTuber/celebrity chef Damian Kordas and model/presenter Anita Nneka Jones.  They are generally adequate hosts, not that exciting and makes me miss previous presenter Davina Reeves-Ciara and wonder why she wasn’t here–well, turns out she’s focusing her energies the following night…  Anyway, they efficiently followed with the national costume parade/introduction of the 77 contestants, featuring taped vocal introductions and set to instrumental versions of “When Love Takes Over” by David Guetta featuring Kelly Rowland, “Perfect Strangers” by Jonas Blue featuring JP Cooper, and “Hold My Hand” by Jess Glynne.

The next competition sequence was a cocktail wear segment with the contestants wearing dresses designed by Renee, dancing to a cover version of “Giant” by Calvin Harris & Rag N’ Bone Man.  After this sequence they called out the first 12 of the Top 25 finalists.  Why the split?  Well, if you recall previous Miss Supranational editions, they still want to feature all contestants parading in swimsuits so they split the quarterfinal announcements so they can have that segment.

For the swimsuit segment, the 12 previously announced semifinalists and the rest of the competition paraded in yellow-and-black zig-zag striped (mostly) two-piece swimsuits, as “This is What You Came For” by Calvin Harris & Rihanna and “Señorita” by Shawn Mendes & Camila Cabello blared behind them.  And then they announced the remaining semifinalists.

Before I discuss the other sequences further, I have to note I got 18 of the Top 25 correct.  Five of those I betted on didn’t even make the official Top 30 list.  I suppose in a very competitive group like this year’s batch was, ECUADOR (María Fernanda Yépez), ROMANIA (Alexandra Stroe) and RWANDA (Shanitah Umunyana) probably got some credit but just not enough to make even the Top 30.

But for me the most shocking exclusions were for BELARUS (Karolina Borisevich) and most especially AUSTRALIA (Alexandra Wallace).  I thought both have the sparkle to make more serious inroads to the Top 25, as they seem to have all the bases covered, but it’s shocking they are not even listed in the Top 30.  Wonder what happened here?  My only speculation is that they did something that rubbed the judges or organizers the wrong way, hence they were penalized and shut out of the Top 30.  It’s sad for me to see them become the 1st runner-up and winner of the Ruth Ocumarez Award, respectively.

Post-pageant, there was one who had the consolation of winning the Congeniality award, and she is SCOTLAND (Aimee McGarvie).

Now, let’s discuss the five ladies who just bubbled under the Top 25, starting with:

30TH PLACE:  SRI LANKA – Wasana Gunasekarai.  As I sensed, the judges in this pageant are in an exotic mood, which contributes to this showing.

29TH PLACE:  BRAZIL – Fernanda Maria do Carmo.  Considering she was making a standout impression throughout the pageant activities, it’s a little shocking that she didn’t fare as well as most expected.  She would’ve been my third place winner for the Ruth Ocumarez award, but perhaps this rank could be treated as a consolation.

28TH PLACE: BELGIUM – Camilia Martinez.  I would’ve ranked the likes of AUSTRALIA and BELARUS over her, but I suppose besides a taste towards the exotic, the powers-that-be decided to reward her for her role as translator during the SupraChats and possibly other activities.

27TH PLACE:  JAMAICA – Kimberly Dawkins.  I suppose the judges simply preferred another Caribbean delegate that they just couldn’t find room for her.  So, like BRAZIL, that she made Top 30 is a consolation. 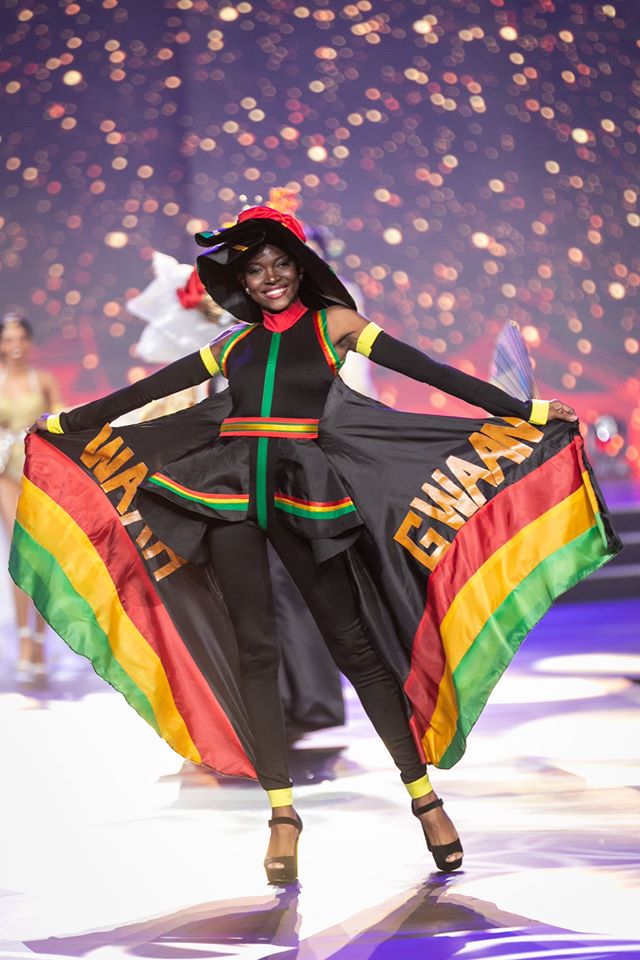 26TH PLACE:  CANADA – Gloren Guelos.  I wouldn’t expect her to fare this high, but well, the judges have tastes favoring exotic types like her, and she does have good interview skills that probably helped her bubble under the Top 25.